Female patient referred at birth in 1987 with imperforate anus, abdominal distention, and a funnel-shaped appearance to her vaginal introitus (Fig 1). No meconium had passed. Cystogram showed several diverticula arising from the bladder, shedding little light on what the anatomy might be. Endoscopy was performed before laparotomy to relieve bowel obstruction. There was a wide urogenital sinus with no structures entering it. There were multiple openings in the bladder including a patent urachus. 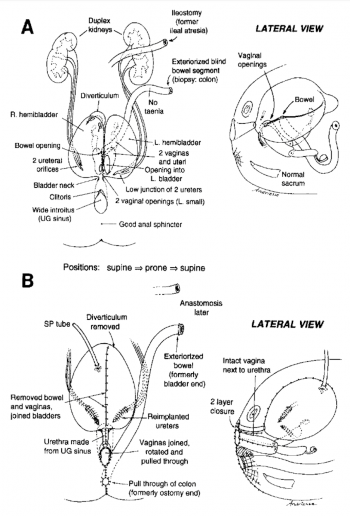 Fig. 1. A. Preoperative anatomy. Two bladders, 2 vaginas and uteri. End ileostomy for ileal atresia at birth, and colostomy for blindly ending microcolon. B. Postoperative anatomy. After cloacal repair at age 2 years, because of its complexity – bladders joined, 4 ureters reimplanted, vaginas joined and rotated to prevent fistula. Note pullthrough of once blind end of microcolon as rectum.

Real atresia was found at laparotomy; below it there was a gap in the mesentery and a short segment of colon in the lower abdomen. The upper end of the colon was blind and the lower end connected with the vagina and bladder which were tethered upward. The right ureter was imbedded in scar surrounding the vaginostomy and required mobilization. The patient was then turned prone. The vagina was separated from the urogenital sinus, which was strictured. The etiology of the stricture appeared to be compression by the pubis because the bladder was pulled upward by the vesicostomy. Resection and reanastomosis of the urogenital sinus was performed. The rectovaginal fistula was divided. The part of the vagina that had been the stoma was brought to the perineum. This was possible because it had been mobilized from above. The rectum was tapered and placed within the muscle complex. The patient was then turned supine to reimplant the right ureter and place a suprapubic tube in the bladder. Endoscopy 2 weeks later showed satisfactory healing. A new urethral catheter was placed to allow further healing. MRI examination showed slight tethering of the spinal cord, but neurosurgical consultation felt that an untethering operation was not needed at that time. Three months later colostomy closure was performed. The patient voided well and intermittent catheterization was discontinued. During the next year constipation was a problem and was relieved by enema washouts. The anal opening became slightly stenotic and was enlarged by 2 z-plasties. At age 4 years, rectosigmoid remained dilated. Sigmoid resection was performed.

The cause for the urogenital sinus stricture may have been created by traumatic catheterization or endoscopy bladder. The urachus was closed. The heal atresia was exteriorized. The blindly ending colon was also exteriorized without knowing whether this was the end of bowel that might have been in continuity with the heal atresia or whether it was the end of bowel as usually seen in cloaca1 exstrophy. At age 7 months endoscopy was performed again, but the findings were difficult to decipher. At age 15 months endoscopy was repeated with uroradiologist, Dr Robert Lebowitz, present with a C-arm fluoroscopic unit. As each orifice was visualized, and catheterized, contrast medium was injected, obtaining fluoroscopy and spot films (Fig 2). The anatomy depicted in Fig 1A was derived in that fashion. There were two hemibladders, four ureters, two vaginas entering the bladders, and a bowel opening in the septum between the two hemibladders. There was a diverticulum at the apex of the right hemibladder with communicating openings. 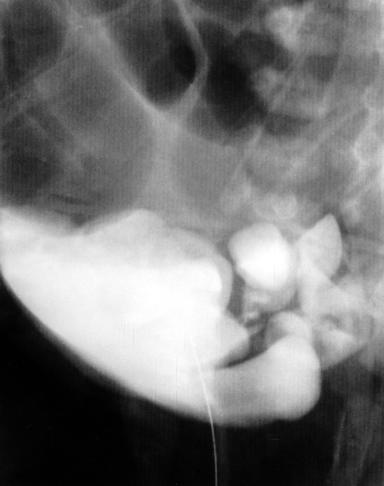 Repair was performed (Fig 1B) at age 2 years. After circumferentially preparing and draping the child, a midline laparotomy was performed to dissect out all of the anatomy. Biopsy specimens were taken from both ends of the distal defunctioned bowel segment because it was not possible from the orientation of its mesentery to tell which end was developmentally the distal one, ie, whether the blind end was what might have been in continuity with the ileum, or whether it was the blindly ending gut seen in cloaca1 exstrophy. Interestingly, there were no tinea on the colon. The bladder was opened and it was possible to locate the two vaginas which entered on each side of a midline septum. They were dissected free from the bladder, using the intravesical approach and were sewn together to create a single vagina. The bowel segment was detached from the bladder. The ureters were reimplanted. The midline septum between the bladders was excised to make a single bladder. The patient was then turned into the prone position to make a posterior sagittal midline incision. The wide urogenital sinus was tapered into a urethra and closed with two layers. The two vaginas were rotated 90” and joined to the perineum. A perineal body was constructed. The appropriate end of the bowel segment was pulled through and enclosed in the muscle complex. The child was then turned supine to complete bladder closure and exteriorize the other end of bowel. The anesthesia time for this global reconstruction was 20 hours. The patient convalesced uneventfully. Endoscopy 2 weeks later showed satisfactory healing. Intermittent catheterization was begun and the suprapubic tube was soon removed. Four months later bowel continuity was restored by resecting the ileostomy and joining it to the defunctioned distal bowel. The patient could not empty her bladder completely and was maintained on intermittent catheterization. Surprisingly, at age 3 years she emptied her bowel 2 to 3 times daily voluntarily and without soiling. A minor degree of rectal prolapse was trimmed as an outpatient procedure. MRI of the spine showed no tethering of her spinal cord. She now voids spontaneously, does not wet, and is catheterized for residual twice daily as a precaution, usually obtaining about 100 mL.

Comment: This case is of special interest because the anatomy initially appeared so complex that there seemed little likelihood that reconstruction would achieve continence. Those gloomy prospects proved incorrect. It was vital to thoroughly assess the anatomy both radiographically and endoscopically. This case seems to be a transition form between a usual cloaca and cloacal exstrophy, because it included hemibladders, vesicointestinal fissure, and a blindly ending segment of bowel hanging in the pelvis. However, there was no omphalocele or bladder exstrophy. 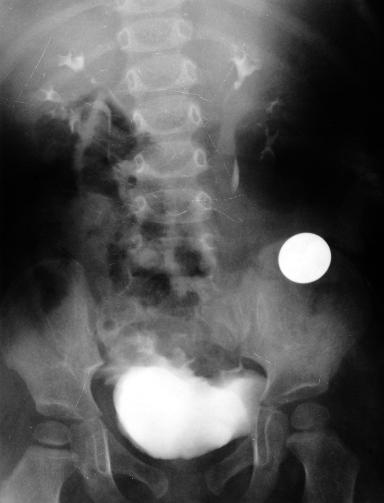